...will need your "Outcome Plan" too ... where are you at regarding My case?

After your apparent "incomprehension" of the April's payment issue and "let it go"
the "consequences" kept on
it was obvious that I was led into the "trap"
therefore "wolverine's technique" was used.

On January at your office I have presented document called
"Aguila y Condor productions" it was written between 4 congressman, 2 students,
4 professors and reviewed by Myself. It was about "intro into My plan", "
"small business incubator" and so on ...
for the first 4 months I have made much afford to turn your attention into it.
... however, you know where you are at now ...
therefore, I request your plan too
it seems you have not much to report back, ... yet.
After the terrible experience of "April's full day" and "your decision" to play it along the system as possum it was clear signal that I was in the trap

and it was the signal to make the "wolverine's jump" on the diplomatic arena since my family was indirectly by your office exposed into direct danger.
Only if you have have seen some action movies

where embassies are involved
and there is a person that does not exist
there is a work contract but is not
there is a monthly payment that no one can sign for or confirm that exists
missing passport for 20 years
canadian MP's Monument
and so on
and then General of Bolivian Air Forces JOSE CARLOS comments
that there is a corruption at that embassies
... it all opens yet a "military look into it"
and that was "my sentence" at the same time "exit door from your office "cutch22"" ... 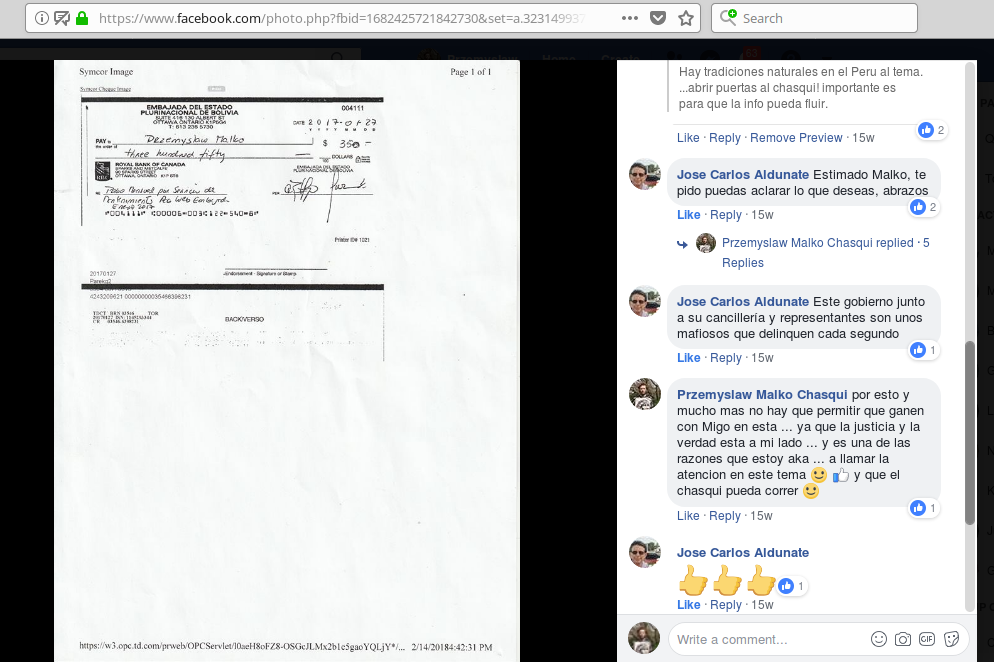 From your office I was reported: "I am awaiting a response from self-employment team. They are very busy during this time and may be able to meet with you during the summer."

you did fail to cover My social needs requested as community start up
after moving from slams of Peru "single parent with a child"
mmm you did not secured My child's education
do you realize that I requested help and non was given since December 2017?
implementation into school ... what does your file say about your plan and
education of MY child? ... what do you have on My file?
you did not even help to redirect to do income tax request
mmm non assistance for a single parent complaining that lives in
wooden add on into the building that should be inspected because of very bad roof condition
...

I can go for hours ... what have you done all this months beside get paid yourself?
Think about it:

I took My child back to Peru
because of your office's negligence towards his education
well being and safety
... he will be better on for now
in the slams of Peru than freezing Canada with no roof condition ...or heating system ...put in a 72 years old retired woman's "wooden box conditions" and with winter's water on the bed ....child.... could not go on. (have it on video)
... do you know how cold it was for My child sometimes? (I have videos)

The other reason was that out to the date the new embassy administration did not know that beside the "past president's relations" and My presence there since 1999 as chasqui .. I was under "military protocol" all parties involved on that operation indeed are under investigation... and as General of Bolivian Air Forces said Indeed: "

and since Peru and Bolivia are top countries in "Mafia"
I had some issues to deal on with because of your limited knowledge into narcodiplomacy I will keep it as short asi possible and simple for you to be absorbed.

I have installed the child on Peruvian slams
back to mother's care
then contacted police regarding "case: "silbato""
Case "silbato" had to do with 4 years investigation into local (in lima)
Judge and some of workers at the ministry of justice
it was not relegated directly to My "camino inca project" yet I did My hours.

After that, I took a bus to Puno Peru
taking the opportunity to talk to one of the "elders in mafia world"
and that was one of the "guardians of the thesis that Peru have a culture"
... slowly during the years they did dropped out
and I needed to talk to him face to face therefore with little money I had left from Canada... I went to see him.


He said that he is not involved anymore
that 16 years is not a vice rector there anymore
that all work I did I should realize that the system is so corrupted thet will never achive the recognition of the Aymara people or language.
He continued on of how I have "lost 21 years of My life" and got "nothing" because this corrupted system did nothing
juts buying time ...21 years lost and he stops there NOTHING CAN BE DONE

NO one care for Aymara not even embassy of Peru in Ottawa
and they did not represent the interests on National Institution as University and will not and the reason of it is the brocken system in place that can do with a citizen what Canada can do with My case.


I took his rezignation and He expected that I will returned with this "quipuNEWS"
back to Lima and then to Canada ... however I have decided to "stay in the TAMBO" for a while and "wait" ... "see what else will come in" ... after all "chasqui" means "the one that receives (waits to receive) " so I did ....
Just in to days some Aymara community leader got in that I had no knowledge about
yet we did talk
and he said about one "institute of investigation" and then about "conflict resolution"
he said his story I said My


He got surprised since did no know about My existence I said that I will stay some days (because of the weekend) and on Monday will go to
"Provincial Government" to ask:
"How can it be that according to the ex Vice President of Academics I have lost 21 years in establishing that they exist? "
He said he will talk to his people about it and see what they can do about it. I said "OK"

On Monday 32 local rural community leaders appeared to support My camino Inca and walk into "Government building" perhaps even to find the Premier of the Province. mmm

Aymara are violent people once ....years ago.. one demonstration that I have organized did end up at the university with one dead and 19 people injured by guns by police. This time since one of the 32 leaders was from the town "illave" from where years back entire town killed a Mayor ... it was indeed complicated for Myself ... yet I went.

My approach was aggressive and I did not enjoy that yet "it was 21 years" question I had about.

of the Current Premier of the Province Campaign Manager got out to greed our group front of the building. He asked if I remember him I said "NO" Then "Yes" ... I did ... He was so happy to see Myself We proceed to tell the stories of when I was in Puno back in 1997 he use to come front of My window as a child ask for 50 cents or 20... I use to drop couple of coins every day at the time so ... after I left ..."they missed Me". There was a particular group of 3 children that He was part off.

One day, back in 1997, President Fujimori arrived at University with 28 computers 26 went for the University, one went for the President of University and the other I got.
Since I had the laptop I let to have My "presidential Present" to one of that children from the street that I use to drop coins from the window and now "the campain manager".
That computer changed life of that child we had something to smile about and, ...to let go the "tensions".

I have instructed My "escort of 32 Aymaras" to "stay down" and wait for the instructions on the main plaza.

SO we did talk many thing about
and I am confirmed that I have full support from the current Government there to advance.
Then, I asked about the opposition, since the time is so short. I was told about reelection plans adding yet in a form of a joke that the "opposition" are My friends too ...and even last place expected I know from childhood too ... therefore no matter who wins I ...get to know the Premier and we are clear about it ...that Aymara do exist
they do have a culture
and University exist too


I am requested to be back in Canada in about 2 weeks and to add on into my file "aquila in condor", that you have,
2 more points ... I should work on that to be ready. ...cooperation with chamber of commerce and so on should add it into My "proposal".

There is much more however I have replied to you moment ago second email therefore will not keep you longer and send as it is ....

yet indeed there is much more to it.

...are WE ready?
I am in Lima at the moment and will have meetings with 2 senators this week regarding "camino inca" and of how to proceed at your office so you take your job serously and find a productive solution into My social issue

P.S. On My spare time I do some hip hop attempts to express Myself yet I am far from being good (I was reffering for april date not august for example) (yet working at it, "imprvising") ... I hope you know what I mean

Please be aware that I request next month allowance to cover expenses and once in town I need to be reintegrated ...up to now I see no advancement on your part.

I am showing everyone I can from economists, academics, senators, and ministers, of your April's calculation ..everyone in Peru can see that you were wrong ... april's allowance was not calculated correctly as well confirmed by military and police intelligence's officers /....

... therefore please work correctly and
according to the SOCIAL CONTRACT :)

YET WE HAVE THIS FILE TO WORK ON

+ and the Proposal at your office called "aguila & condor producciones" the one I have presented as SMALL BUSINESS INITIATIVE and was told by you to wait till summer. (I did some background work on it and I am ready more when you are ready and I am without a child because of that April's DIPLOMATIC JOKE ... ()

I just got this:

you say: " Thank you for your prompt response. I would like to update your current activity. Are you currently looking for work? or volunteering? Or Studying? "

I say: "....Had to remove a child from danger zone because of embassy's mafia ... and please read "PROPOSAL FOR A PROPOSAL" since I got My passport back rest of the project and answers to your questions you will find it there too!!! ...yet the most important now is "aguila y condor productions"